I finally got my day off yesterday. It is the first day I have been able to touch my sewing machine in probaby at least two weeks. I rethreaded it for the hundredth time and it has finally stopped telling me it was threaded improperly. I made a drawstring bag that I hope to debut in my etsy shop sometime in the near future. I think the next one I make I will change the dimensions somewhat. This bag I made thinking it would be great for a small project bag for crochet or knit or other crafty things, but after creating it I also found it to be a great size for all those little kid things that get hung under the sofa. This bag would be perfect for the boys' Bakugan cards and brawlers.... or if you have a girl Polly Pockets or doll clothes. 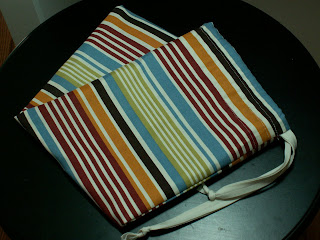 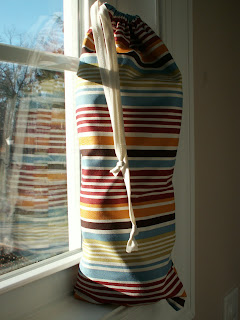 Posted by Pocketful Of Dreams at 9:51 AM No comments:

This week has been one hectic week. It started off with lots of excitement as my sister-in-law was admitted to the hospital for pre-term labor at 34 weeks. Even though the baby is now weighing about 5 lbs. they want his lungs to have more time to mature. They did manage to get her labor stopped and they sent her home telling her it should be at least 2 weeks before she goes back into labor, but hopefully it will be 4 weeks. That night I woke up incredibly sick and it has taken me the past 3 days to get back to some resemblance of normal, but thankfully I'm feeling much better now.

Considering now that my little nephew has now tried to make his appearance and the fact that my sister-in-law's baby shower is next week I decided to finally add the finishing touches on her baby gift. Lots of pics to follow! I hope she loves it. :-) 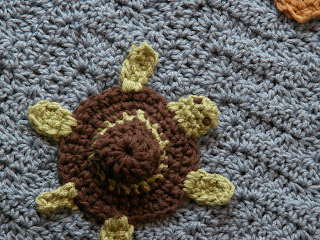 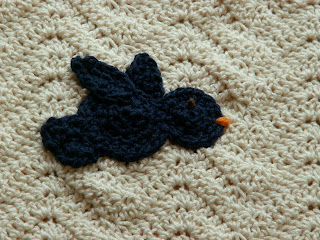 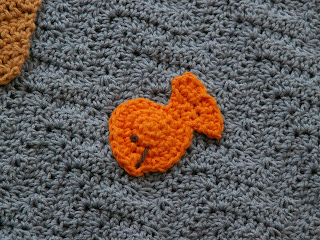 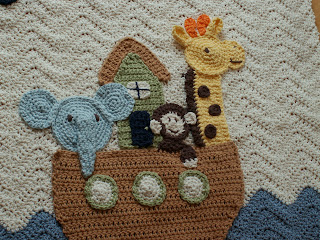 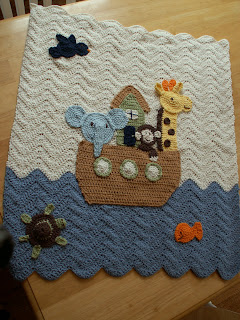 Posted by Pocketful Of Dreams at 12:22 PM No comments:

The one thing I have been trying to get around to for over a week now is making the boys tooth fairy pillows. Below is a picture of the front and back views. I'm still not a great seamstress, but it is a work in progress, and I have come a long way from the woman who was scared of the sewing machine. The boys seemed to like them and I got them done in time. My oldest has two loose teeth right now and I finished it before they fell out. ;) 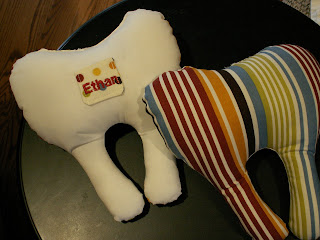 Posted by Pocketful Of Dreams at 1:50 PM No comments:

Yesterday was such a packed day that I didn't have time to post until it was late, and by then I frankly didn't feel like getting the computer out. I worked out in the morning and that afternoon I got to go to my sister-in-law's OB appointment for her big ultrasound which was pretty exciting.

Along with my nephew who is due next month, I am going to have a NIECE in June! 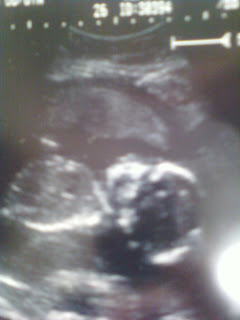 We ended up at the OB office for 3 hours! There was no one there because the weather was nasty here, and the doctor still made her wait for 2 hours before seeing her! When he came in he spent a whole 3 minutes in there after all that time. I was not impressed with this place at all.

I also broke down and took Bessie apart. She had me to the point of wanting to swear and I don't do that, so I said enough is enough. I will get around to working that out later, but hopefully I can get around to sewing a little over the weekend. All the projects are piling up and it's starting to get under my skin. I now have to add another baby blanket to the list since I know she is having a little girl now.
Posted by Pocketful Of Dreams at 11:58 AM No comments:

Changes... They are a coming!

Bessie (the embroidery unit on my otherwise sweet little Singer) and I have been fighting for two days. I haven't quite figured out what it is she wants from me. I bought the tear-away stabilizer and now I'm having a thread breakage problem, so I'm going to do my homework and break out the "Embroidery Tips" disc that came with the machine later and see if I can learn anything. For some reason I can't resist the urge to sing "I'm Not Givin' Up" by Gold City every time I sit down at the desk. I think the next thing I'll try is changing the needle. I'm going to resist the urge to remove the embroidery unit until I have conquered this!

For those of you who have been watching my Etsy shop I have some big changes coming. I think I'm going to completely revamp my shop. I have ideas for several new items that will be of interest to all you crafters out there! Now I just have to find the time to make up some inventory. Keep your eyes peeled for the unveiling of new handmade items!!!

In family news, I get to go with my other sister-in-law tomorrow to her OB appointment for her ultrasound! Did I mention I'm going to be an aunt twice this year?? I think she is having a girl. We'll find out tomorrow, but if it is then I'll have a nephew and a niece within 3 months of each other. I just love babies! Why do they have to grow up so stinkin' fast?
Posted by Pocketful Of Dreams at 11:02 AM No comments:

Today was spent grocery shopping. I really hate grocery shopping. I had my coupons clipped and throughout the course of the day made a trip to 3 different stores. Thankfully my freezer is officially stocked now. My 4-year-old was a trooper to hang in there through all that and my oldest son was actually glad to be going to school when he found out we were hitting multiple stores LOL. On the bright side though while I was out I did score some awesome fabric for a little project I'm working on. The picture is kind of dark, but hopefully you get the idea. 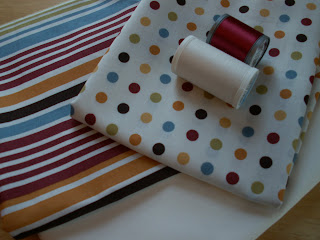 Since today was technically my day "off" I usually set it aside for crafting, but my time was quite limited today. I tried to get it out and work on a little monogramming, but apparently Bessie and I need to work on our communication, because we were not seeing eye-to-eye tonight. Here she is hard at work. I think I'll be heading back to Hobby Lobby or Wal-Mart tomorrow in search of a better stabilizer as I was not really that pleased with the final outcome. (This is all trial and error for me, but I will conquer this!) 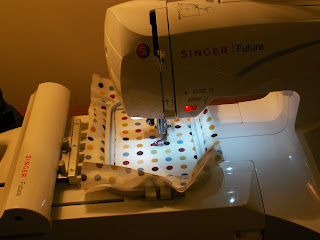 If anyone has any pointers on machine embroidery I would love to hear them. This seems to be a great machine, but I just haven't quite gotten the hang of the embroidery yet.
Posted by Pocketful Of Dreams at 6:23 PM No comments:

Pocketful Of Dreams
I'm just a small town southern gal who loves her family and creating things with her own hands. I'm a firm believer in using what God has given you. I tend to keep my head in the clouds with my feet on the ground.